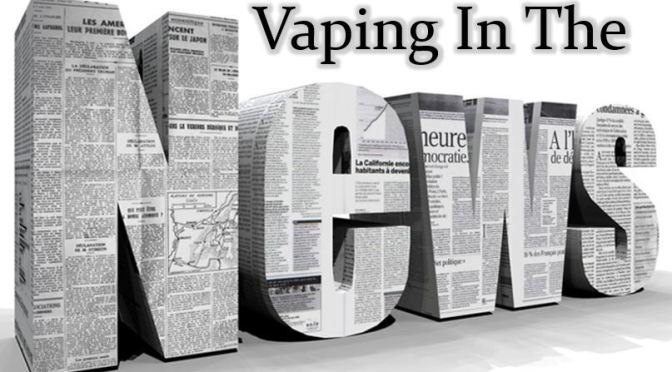 The largest threat to Public Health is an informed consumer.

What a week. There was a ruckus. Allow me to try to describe the ruckus.

Gazillionaire Bloomberg announced he was spending spare change found around in a cup holder in his car $160M on an initiative with Tobacco-Free Kids to ban flavored e-cigarettes.

Then, President Trump meets with Health & Human Services puppet Alex Azar found here and here. Azar proudly left the meeting announcing he will be “finalizing policies that will clear flavored e-cigarettes from the market”. He reiterated it again here.

This opportunity didn’t go to waste. This was a well-timed advantage by the Food and Drug Administration (FDA) to capitalize on deaths in the U.S…. a bit of momentum.

After all, this wasn’t about products that are used daily by millions who have switched to a less harmful product. This was about illegal black market Tetrahydrocannabinol (THC)-containing products that use similar devices as vaping products.

Funny, ha-ha, because on September 9th, the FDA themselves had already released this statement.

What was that ruckus about? Manipulation. The opening presented itself, and “public health” wasted no time to nail a spike through advocates hearts, strengthening their effort to shut down an industry who’s goal is affording smokers choice and opportunity of a less harmful product.

The truth does come out – this, in fact, is illegal black market products they should’ve been focusing on – but it’s too little, too late for some. But there is more to this.

Simply use “vapinglinks” at checkout for 15% off your entire cart!

Trump – for some reason, changed his mind – and tweeted it. Not completely, remember – Azar was “finalizing”… meaning those plans were already in process.

Either way, a much #louder ruckus I and others have tried to figure out how to create for years, Years, YEARS, has reared its pent-up frustrated ugly head nationally – and done some good. In the process, it created a momentum of its own.

I can’t find a direct link to the statement(s), but saw calls to the White House opposing this decision overwhelmed the switchboard with wait times and busy signals.

I, as thousands of others, have tweeted my sentiments to President Trump. After all, they lied to his administrative face.

is making everyone aware of New Jersey… and another circle is complete with a fresh voice, a sharp eye, and inquisitive, educational spirit. I needed to see that.

Along with Cherry, Michael McGrady is reporting about

The Cries (and Lessons) from Michigan

I tried to describe the ruckus

What I witnessed were spectacular moments over the past week. I saw a shift in the “vaping community”. I saw what seems like the largest national momentum by industry and consumers I’ve never seen. Lets keep that up. This battle is FAR from over.

There are people from the industry going to Washington this coming week. I am confident they are beyond adequately skilled to voice the professional position(s) of their members.

If you aren’t supporting one idea, support another. It is, after all, your choice. If you don’t think something is being done “right”, be inspired to create something better.

An idea from Bill Tarling: Snail mail. What if everyone reading this blog spent 10 minutes and .55 cents – and mailed a letter to the White House in opposition to a ban. Imagine being inundated with thousands of letters? You can’t delete paper.

Just to keep it fresh in the President’s mind.:

Oh, and there’s a consumer driven march on Washington being planned as I type. United Vapers Alliance. More is coming on that.

This blog is sponsored by LUNAR ROVER|Premium eLiquid.

They not only produce cocktail and fruit flavors, they also have a range of tobacco flavors ranging from 0-18 strength.

Simply use “vapinglinks” at checkout for 15% off your entire cart!

Are you familiar with Tobacco Harm Reduction For Life?

Are you familiar with GONZO GIVES?  VapeTithing? Do that! #FundTheFuture!

Your comments are NEVER filtered, always encouraged and welcome at the bottom this blog. There is definitely more to come.

Your comments are NEVER filtered, always encouraged and welcome at the bottom this blog. There is definitely more to come.