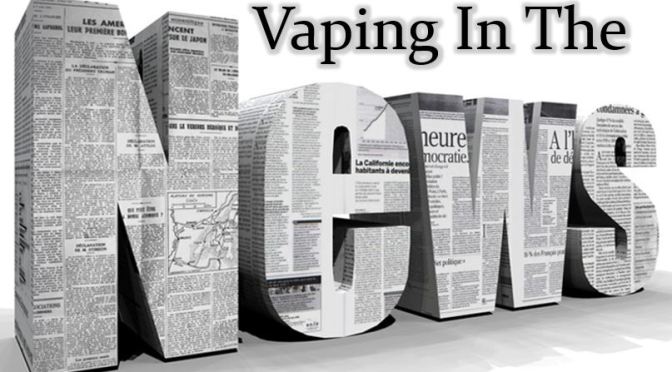 Brent Stafford and Regulator Watch have been pressing many issues in the e-cigarette world and keeping us informed.

The FDA Deeming Clarification Act of 2017 (HR 1136) was introduced on Thursday, February 16th. Republican Tom Cole of Oklahoma (4th district) and Democrat Sanford Bishop of Georgia (2nd district) have built on previous legislative attempts from 2015 and 2016. HR 1136 is an updated version of HR 2058 and the Cole/Bishop amendment.

The Tobacco Harm Reduction Association of Canada has this survey for anyone to take.

The importance of your voice is NEEDED.

A Billion Lives has been released worldwide.

This film received NO funding to make this movie. I’ve already heard from #FreeTeamShit that it is being bootlegged.

There is no reason not to see it and NO excuse to watch it for free.

Son of a bitch, this is LESS than a bottle of e-liquid.

The Director of Scientific Communication with CASAA, Brian Carter, posted this on Twitter yesterday:

RENT or PURCHASE A Billion Lives

Since e-cigarettes and nicotine were deemed a tobacco product on National Tobacco Day, you can be fired, or “not hired” due to tobacco use.

In some cases, adult tobacco users have even been fired from their jobs just because they use tobacco products during their free time, and that’s not right….

…in some workplaces, if you smoke or dip, you won’t get hired.

Regulation gets a gander

“Future policy debates should evaluate the opportunities for vapour devices to decrease the health and social burdens of the tobacco epidemic.”

The Mayor Of TobaccoVille

Surprise, the New York mayor is is an idiot.

Bill de Blasio and Big Tobacco: Together in Smoke

That does not mean “anything”. The new SG, Sylvia Trent-Adams, surely will take her place in the saddle to do exactly as she is told.

Trump gets rid of surgeon general

For this company. True North Communications.

Chris Price gives his view of the negative effects in classic style:

What are the negative effects of electronic cigarette?

From Robert Morgen, a report from British American Tobacco showing the effect on genes…………..

“The results were astonishing.”

No Proof of Nicotine Addiction

Nicotine addiction MUST to be at the top five lies in public health, tobacco control and is, in my consumer-driven view, the largest lie in smoking “cessation”.

I’ve tweeted and posted this challenge to facebook to many useful idiots. Many of you have shared it, and thank you. (I’m still on a mission.)

NOT one public health expert has proven addiction to nicotine in my challenge.

Originally set at 30 days, I have not let it expire. I think they need more time.

*Think of the implications of the claim, and the multi-million dollar industry who is unable to prove me wrong.

Mike above is the VP of a company that believes lowering nicotine in cigarettes is a good idea.

More on that next week. In the meantime, they can still prove themselves right, and you can still donate to e-cigarette research.

WE are raising funds for Dr. Farsalinos & his team.

NEWS from my friends across the pond: Vapers.org.uk.