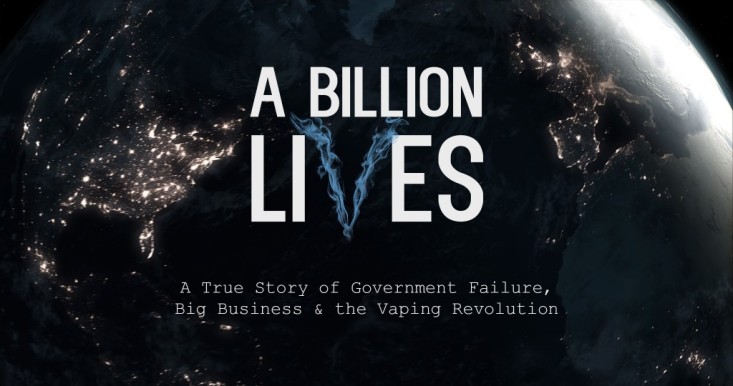 The actions of government, public health and tobacco control stating there is a desire to decrease or end tobacco use is a smoke-screen. Corruption and power over the general population wielded by those in “charge” is quietly disguised as authority and compassion.

Exposure of this film is essential to dissect the hypocrisy for the public. This film points directly to the inexcusable position “authorities” have taken publicly against vaping products demanding regulation, forcing bans and repeating lies. This has given smokers searching for the truth about these products a bleak, misinformed perspective.

The world needs to see the orchestrated manipulation documented in this film, and they need to understand why it’s happening. Those in charge need to be held accountable for their actions as well as their in-actions.

A task not meant for the weak or timid, the ‘A Billion Lives’ crew is about to challenge the ultimate authority, the World Health Organization in Delhi, India – during the biggest “tobacco control” meeting in the world, “The seventh session of the Conference of the Parties (COP7)”. The A Billion Lives premier in Delhi is November 9th, 2016.

Who is in the documentary:

Who declined to be interviewed for the film:

A Review Of A Billion Lives … I Didn’t Hate It

A Billion Lives opens in the USA, while transatlantic research divide continues to widen

A Billion Lives Review – We Saw It! Did It Deliver?

A Billion Lives. Feel the passion, love your neighbor.

A Billion Lives – Part 1 The Road Trip to Milwaukee

Review: ‘A Billion Lives’ Claims There’s a Conspiracy Against Vaping

A Billion Lives – What Are Public Health Officials Afraid Of ?

Thoughts on A Billion Lives

Who, among other things, was IN the film… on just where the numbers come from:

A well deserved placement on a list of films, it was announced that “A Billion Lives” was on a list of 139 films being considered for nomination as “best documentary” for the Oscars by TheWrap.com.

Let’s Save A Billion Lives

A BILLION LIVES – THE HOLLYWOOD PREMIER

A Billion Lives: Exposing the lies on e-cigarettes.

This is about a film entitled ‘A Billion Lives’.

Daniel Hall via Guide To Vaping

Steven Pitzl with Timothy Wolf, Antics, The Other Shapes & The Royal

A Billion Lives is an independent film.

If you’d like to see it in your area, go here.

If you are a Professional  go HERE.

E-cigarette news you can use

Every day ~ Monday thru Friday ~ is here from my friends across the pond at Vapers.org.uk.

5 thoughts on “A Billion Lives”