They still insist nicotine is addictive. Dangerous, even. “They” claim more dangerous than heroin. That’s pretty drastic. Kind of scares me. Fine, dear reader, it doesn’t scare me. It scares the government enough, though, eh? I’d like to sit down with “they” for a few hours, have some coffee. Discuss a few finer points of life in general, chat a bit, and tell them now they’re trying to convince everyone it’s the nicotine.

I say it’s NOT the nicotine. Stimulant, like coffee I’ll agree with. Drug? Fine.

Addictive? No. I’ve covered that here, and of course here.

You know that doesn’t matter!

They’re not listening to us. They have tobacco fields to tend to!

The FDA says – and non-committal as it sounds, that it does not “appear to have significant potential for abuse or dependence….. ” (addiction).

So, to make my prediction, since the New England Journal of Medicine released this

Aaaand – The National Institute on Drug Abuse released this:

(Took their time to create and then tweeted this state of the art graphic:)

Briefly – they mention towards the end of their “official” story:

(This is where the perpetuate their lie) –>Nicotine is responsible for the addictiveness of tobacco, but it is not the ingredient that causes cancer and heart and pulmonary diseases.

Smoking still causes nearly half a million deaths each year in our country. Research now suggests that reducing the nicotine in cigarettes to a fraction of its current levels may be one way to lessen the health-destructive power of these products.

Now, with all that, the media – because they do love a good story, I predict that this:

“It is our hope, that because that this is such an intrinsic health concern that we will be able to get this approved in a swift and fast process,” Gellman said.

The company will be working toward FDA approval by the end of 2016……   Huh.

I hate math, but let us do it quickly, shall we? I have a prediction to make! 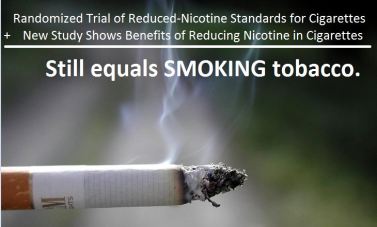 Will lead to this:

People will believe this is “safer”. Because they said so. Tobacco obviously isn’t the issue.

So, e-cigarettes are not safer? Huh.

Here’s what Clive Bates has to say about

I’m a friggin’ mind reader.  They don’t mind the tobacco.

The prediction is better than I though:

I can’t believe my eyes.

The FDA said Monday it has nothing to share concerning the 22nd Century statement.

Speaking of BAT in the UK: Now there’s a “safer” e-cigarette – because “scientists” developed it, it must be true.

From 2007, FDA Director Dr. Andrew von Eschenbach had quite a bit to say:

“We could find ourselves in the conundrum of having made a decision about nicotine only to have made the public health radically worse. And that is not the position FDA is in; we approve products that enhance health, not destroy it,” said von Eschenbach, a urologic surgeon and oncologist who was confirmed as FDA commissioner in December.

Later in the article:

“In an hourlong interview with AP reporters and editors, von Eschenbach repeatedly said the FDA doesn’t need more regulatory authority. When asked if the FDA needed more money, he suggested the agency needs to look at “enhancing our efficiencies, maximizing our outputs for the dollar invested on part of the American people.”

Please, blow social media UP. Tell your non-smoking – non-vaping friends & family members they are being LIED to by these organizations and politicians worldwide.

TELL them about A Billion Lives.

MANY Links are to the left and right of this blog! Please see them!