Like many – and I mean many others in your field, you are claiming you are an “expert”. The controversies you so crave to unravel have been covered many times before. You’ve got a little drivel dripping off your chin in that photo. Lies. Innuendo. Imagine how you’ve created your very own version of the same exact things spouted over and again in the past few years. Imagine my surprise how well it’s worded “differently” – almost believeable! Almost plagiarism! You MUST be proud!

Lets wipe some of that drivel off your chin, shall we? (It’s not ladylike.)
The Last Word: Julie Lautsch
Posted on August 12
Digital Communications Expert, Anti-Tobacco Warrior

On the rise of e-cigarettes

I’ve been working in tobacco control for about five years. E-cigarettes have been a game changer. It’s scary watching children pick up these devices that contain harmful chemicals that they believe are totally harmless. People are not even sure how to approach a person who is using them. It’s hard to have that conversation without users saying they’re not harmful. Unfortunately, the education just isn’t there yet.

You watched children pick up these devices? Allowed them to do so? How inappropriate of you – Since you’re an “anti-tobacco warrior” you think you’d stop them in the act.

Not harmful. Those are your words. That’s ambiguous, but much safer to an adult user than a cigarette. It’s far less harmful, oh great tobacco warrior. I’d say 95% safer, according to actual experts who’ve done research. You know, science.

(Psst, the education you so desire and can’t seem to find under your arrogance is here. No paywalls. No kidding.)

You’re right! E-cigarettes are a game-changer. Disruptive, aren’t they? They’re changing the world for the better. Let’s move on.

On claims that vaping can help cigarette smokers quit

The science is still out. I believe that we have some proven methods for quitting, and that breaking the chain of addiction isn’t as simple as nicotine replacement therapy. There are other pieces of addiction—the social aspect, psychological triggers, stress—that have to be addressed. With vaping you’re not breaking those parts of addiction. You’re still putting harmful chemicals in your body and we have no idea what the long-term effects are.

Science is still out? Stopping smoking is now a science? Just showed you science – here it is again.

Nice try. The proven methods, “science” as you elude to on traditional quitting, “approved” methods are working so well.

Don’t help smokers quit? Huh, all these people must be lying in the U.K. ASH (Action on Smoking & Health – mentioned the words for you – just in case)

Use of electronic cigarettes (vapourisers) among adults in Great Britain

So all these people (42% quit in one day. ONE DAY and they were NOT SMOKING tobacco) taking this survey lied as well?

With vaping you’re replacing smoking. Really. You’re a tobacco warrior, put on your war face. Tobacco Harm Reduction. Don’t they teach that in your part of the tower?

Long term? I’m not smoking so I hope to outlive the lies.

On that “addiction” word you all love to repeat, your favorite word after “children”.

On being David to Big Tobacco’s Goliath

I’ve always loved the underdog in a fight, so in that way I sort of love it. But it does feel intimidating to go up against the 1,000-pound gorilla in the room. What is most challenging is that we are held to these incredible standards of substantiation. We spend so much time poring over research in order to communicate the facts. Meanwhile the other side can say what they want and not have to adhere to those same standards.

Here’s some standards I’ve seen from “warriors”. I consider them “substandard” at best, but again, we’re talking opinions, right?

On my standards I just have this. After over 30 years of smoking, trying all those “methods” – I stopped smoking in under 48 hours. That’s not opinion, Julie. That’s fact. There are MILLIONS of facts walking ’round the world, without lighting up a cigarette anymore. Imagine that?

Now – with over two years of using an e-cigarette,  my wife quit when I did – using one as well. That’s two years without combustible tobacco. Times two. Non-smokers. No tobacco. Imagine that. 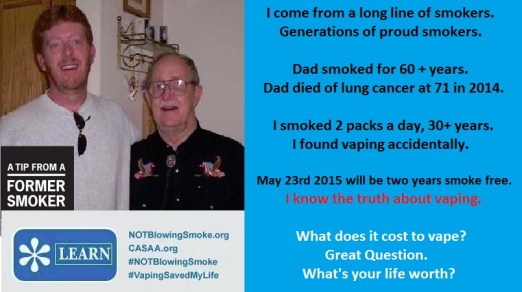 Feeling better was within a week – cough was GONE. Stunning. I was SO motivated to find truth, I did this survey of the real experts, with over 7,000 vapers themselves, from 72 countries.

Imagine my surprise in this ongoing survey – take it if you like  – it seems about 84% disagree with you. Not just us common folks – these are real Medical & Health Care Professionals. What was your degree in again?

Medical experts say many things so far in this still ongoing survey.

On facing threats from vaping activists

There has been a lot of vitriol expressed by pro-vapers online, and most of it has the same theme: trying to discredit the science. Many of us who work on these issues have received threats. There’s even something called the Vaping Militia that has bullied health educators at public forums. It has been scary. We want to allow for a dialogue with people who are supporters of these devices, but it has to be a productive conversation.

I have never threatened anyone. I’ve been on twitter a little while, never SEEN anyone threatened – heard of it, maybe it’s happened – shouldn’t!

On proper engagement – I’ve been blocked by Glantz, Chapman, quite a few others, like “Dr Campbell” above – but they don’t want to hear truth. They want to hear accolades and agreements with their versions of fluff – not even their own studies, just bloated old bores without meaning wanting the masses like ME to bleet like sheep at their lack of both intelligence and honesty. They want respect, they want nodding heads, attaboys – Well – start telling the truth if you want that. 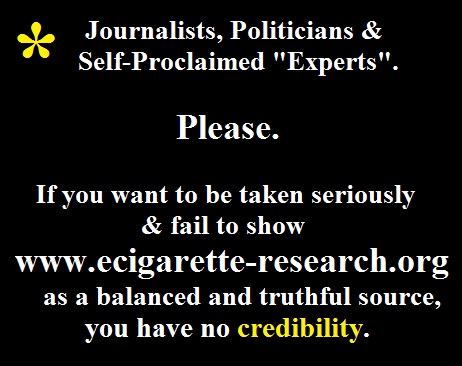 I’m shocked that a “Digital Communications Expert, Anti-Tobacco Warrior” like yourself can’t seem to find that.

On lessons from the front lines

I would say the work in tobacco control has mostly taught me about fighting the good fight. There are so many people out there who want to be rid of these products.

I’m more inspired by those people than I am scared of the bullies.

I”m not bullying anyone. I’m stating facts. You’re perversion of those facts are influencing people to make decisions to continue smoking rather than get off tobacco. Feel good about yourself having the last word. Your “expertise” is questionable at best. Your effort to be a warrior is laughable and irresponsible.

Very irresponsible. So much so, you’re pretentious attitude and “expertise” can alter peoples decision to stay on combustible cigarettes. Good for you. Keep that up.

Ohhh, that’s right, you didn’t cite any of your own research, you just jumped on the bandwagon.

You know who inspires me? People who are responsibly getting themselves off tobacco. Effectively, they’re doing your job. That must make you feel wonderful. Against everything including you – and people like you – spouting all the efforts of a seasoned “expert”, e-cigarettes are changing the world.

I’ll bet you one paycheck against yours, if you properly SEEK the truth and you properly engage ANY of these Professionals at M.O.V.E. – not one will “bully” you. Not ONE. They’ll tell you – not suggest – tell you what you should be saying. With proof. Science. Research.

What are you afraid of? You certainly didn’t allow for comments on sacmag.com – that must have meant you wanted control. The last word. Well, sweetie, you’re not getting it, history is.

We’re saving our own lives despite you and sadly, people like you.

So Julie! YOU’RE the “Media Unit” responsible for The CADPH marketing to kids!

is here for posterity: The Last Word: Julie Lautsch

As always, there’ll be more to come.

Keep On #Vaping On.